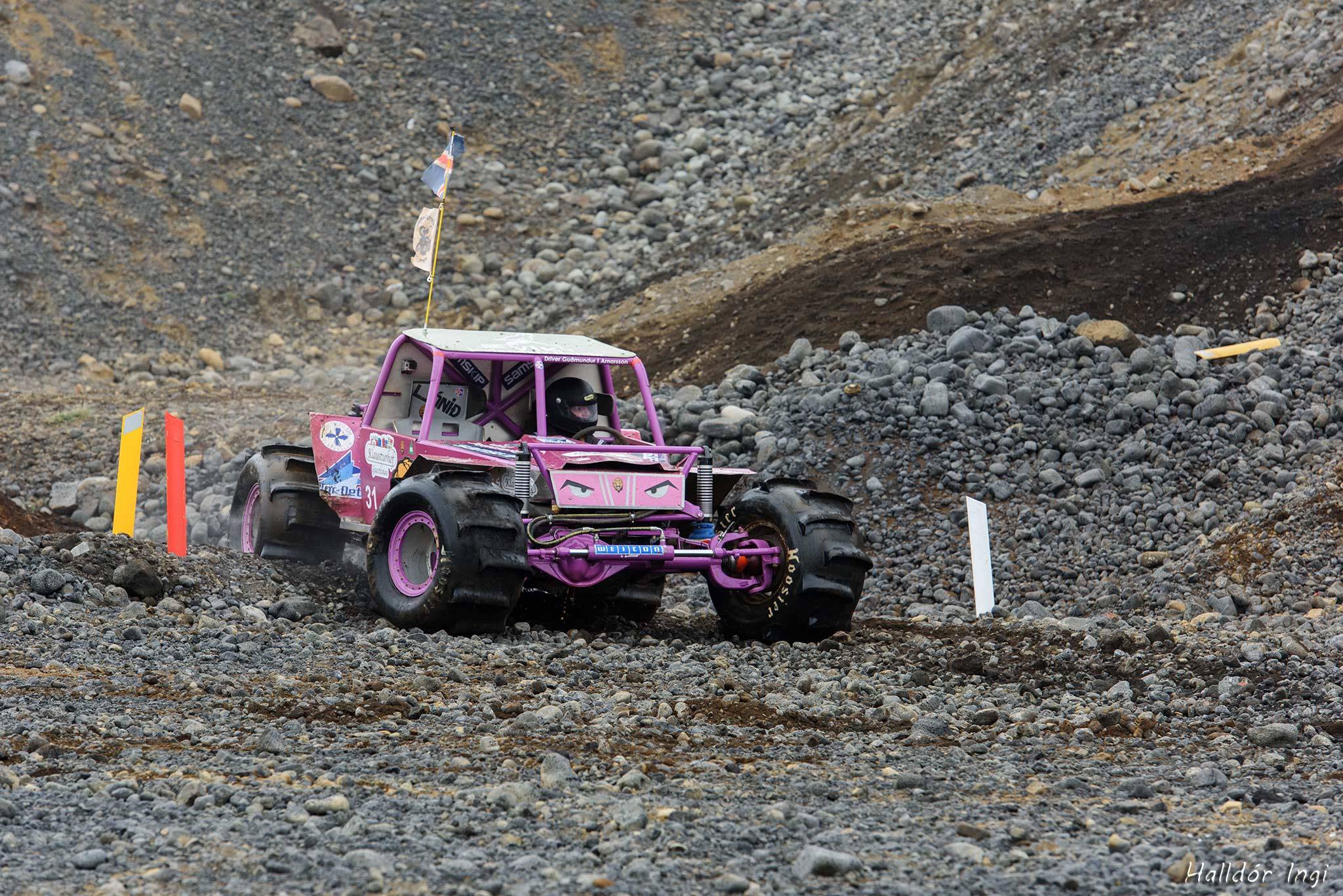 After two rounds, The Lion is in the lead with 40 points in the Icelandic championship  – if the results stands.

The second Icelandic championship was held in Stapafell this weekend, Saturday 27 May. and the main talking point after the race was the accident in the fourth track in unlimited class. Atli Jamil on Thunderbolt then had a big jump which resulted in a injury on his back or neck.

Later it was reported by his family that after first scan in hospital Atli was not seriously injured. It is much down to the safety on board these cars and right reactions from the crew in Stapafell. The rescue staff had to cut the roll cage of Thunderbolt to be able to get Arni out of the car in the seat. That took some time and not knowing how serious the injury where, it was decided not to finish the race.

As mentioned before, this was only the fourth track and not every driver had finished the track so only the first three tracks applied in the race. The last two tracks where very promising but safety always comes first and not knowing how serious the accident was, the race organizers made the right call.

It is still not known whether the points from this race will apply to the Icelandic championship but if they do, Gudmundur Arnarsson on the Lion will have 40 point after two win in two races. He came out on top after three tracks and that was enough to secure the title in Poulsen Formula Offroad.

Second in unlimited class was Thor Thormar Palsson on Thor. Thor is obviously starting to get to know his car that he bought from the four time Icelandic champion Snorri Thor. Following a rather bad start at Hella, at least compared to what this car was used to with the previous owner, the driving from Thor was much better and hopefully he can carry on those improvements in next races.

Third, just like in the first race in Hella, was Elias Gudmundsson on Otemjan in only his third race and second on this newly bought car. That is very good for a newcomer and it will be exciting to follow him this summer. He is the second in the Icelandic championship with 24 points, again if the points will apply.

Haukur Vidar Einarsson showed up on a brand new car and did very well. He finished fourth and it is safe to say that he was unlucky that the race was cut short by the accident because he was driving really well and getting better by every track. The car looks very similar to both Thor and Guttinn Reborn. Ingolfur on Guttinn reborn actually came fifth in the race so the cars in second, fourth and fifth all look quite similar.

Ragnar Skulason on Kolski made up for his mistakes in Hella by winning the race in Street legal class. Because Steingrimur Bjarnason on Strumpurinn came second in front of Edvald Orri Gudmundsson on Pjakkurinn, Ragnar is now first in the Icelandic championship in Street legal class. The first track in Stapafell made a huge difference to the results as Ragnar got 350 for that track and Steingrimur Bjarnason 220 points while others only got 90 points or less.

Next two races will be held in Akureyri 10th and 11th of June. Two days of competition should trigger everyone to participate and if that will be the case we are for sure in for a fantastic weekend of Formula offroad! We would also like to take the opportunity to wish Atli Jamil a speedy recovery and hopefully we will see him again soon in his car.